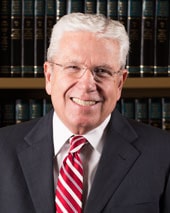 For more than 40 years, Arkansas native Phillip Duncan has worked tirelessly to help injured Arkansans and their families. Upon graduating from Arkansas State University and University of Arkansas-Fayetteville School of Law, he began his career as public defender in Little Rock. Later, he entered into private practice as a plaintiff trial lawyer. Over the years, he has earned a reputation as a fair but fierce trial attorney committed to being a champion for the rights of others.

The Duncan name has been part of many other law firms. But in 2006, he made the decision to launch his own. Today, Duncan Firm defends the rights of people from all walks of life. Supported by a team of personal injury lawyers and experienced staff, Phillip Duncan who will seek the justice you deserve.

Compassion For People, a Passion for Justice

From the top floor of Three Financial Centre, the family-run Duncan Firm works with unequaled care to bring justice to those suffering from unexpected and tragic injuries or wrongful death through the fault of others. Phillip Duncan has handled cases and class-action suits involving serious injury and death not only in Arkansas, but nationwide.

Phillip Duncan approaches each case as if preparing for trial and regularly utilizes cutting-edge technology – a combination that has helped lead to multi-million-dollar jury verdicts and settlements.

Married with three daughters, Phillip Duncan believes in the strength of family. The legal team at Duncan Firm is a reflection of that, made up of family members and loyal staff with many years of combined experience in law, business, and insurance. All are dedicated to helping clients and their families receive the attention and help they need.

In short, we go the extra mile to look out for your best interests. Because Phillip Duncan's name is on the door, you can count on it.

2020 © Duncan Firm, P.A. All Rights Reserved.
‍
Disclaimer: The information throughout this legal website is not intended to be taken as legal advice. The information provided by Duncan Firm, P.A. is intended to provide general information regarding truck accident cases, personal injury, car accident injury, business services and other types of cases in Little Rock and throughout Arkansas as well as states where one our lawyers is licensed in such as California, New York, Florida, Connecticut and DC. This website is "attorney advertising.” Contacting Duncan Firm, P.A. via this site does not create an attorney-client relationship, until a representation agreement is signed by the client.
Terms & Conditions | Privacy Policy | Sitemap